Kinloss Abbey is a Scheduled Ancient Monument and Grade A Listed Building of considerable significance in the context of North East Scotland.

The Abbey was founded in 1150 by King David I and was colonised by Cistercian monks. It has had an interesting and colourful history and for 400 years was extended and modified many times.

The reformation of Parliament in 1560 finally saw the end of Kinloss Abbey and the ruins were sold in 1645 to Alexander Brodie of Lethen, who sold the stone in 1650 for the construction of the Citadel in Inverness.

A programme of ivy clearance was conducted by Moray District Council completing the work in 1995.

Some conservation works were carried out by the Moray District Council, under the guidance of Historic Scotland, to the remains of the south transept between 1991 and 1995. The remaining standing remains were surveyed in 1995 by the Royal Commission.

Over the coming years it is hoped to conduct a series of projects at Kinloss Abbey to help improve the public awareness of the Abbey and to conserve the Abbey ruins for the coming generations.

This work will be a slow but professional process involving a large amount of funding from various organisations.

For various reasons it has been decided to split the work into a series of Projects each with a definitive end-state. 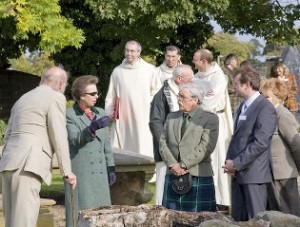 The main Abbey area has significant heritage value and required action in three areas – conserve and enhance the remains of the Abbey through a programme of conservation work; raise the profile of the Abbey locally to instil a sense of ownership and care for the Abbey; increase accessibility to and a greater understanding of Kinloss Abbey through promotion, signage and interpretation.

This project was completed in 2008. The work was carried out by Laing Traditional Masonry with financial assistance from Moray Council, HIMoray and the Heritage Lottery Fund. Interpretation boards now inform the visitor about the history of the Abbey.

The Princess Royal visited the project in September 2008 and was shown the sympathetic conservation of the main building. 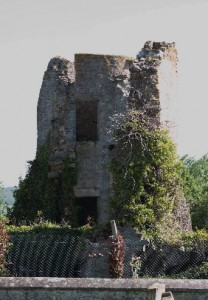 To the south of the main Abbey enclosure lies the Abbot’s House. The area is currently fenced in and is very overgrown. As the result of a local farmers need for dry stone walling the east gable wall of the house was dynamited in the early 20th century leaving the majority of the structure in an unsafe condition.

The ruins include a stair tower with a low vaulted area and portion of ruinous wall, and tall free-standing length of wall containing a chimney, flanked by two low, single storey vaulted structures with adjacent wall remains. The tower and the chimney stand approximately 8 metres high. All the remains are built of yellow sandstone
rubble and field boulders with ashlar dressings.

It is the intention of the Kinloss Abbey Trust in collaboration with Historic Scotland and The Moray Council to make safe and restore the ruins of the Abbot’s House so that it will be safe for visitors to explore.

This work will include access from the existing site into the house and interpretation boards for information and educational purposes. In time it is hoped to have a visitor’s centre in the area.

As with the main Abbey area, Historic Scotland have conducted an initial survey of the site and identified the work that needs to be carried out.

The Trust have appointed a consultant to produce a Feasibility Study and are currently sourcing funds for this to be carried out. This project will not be a ‘quick fix’ as a very large sum of money will need to be raised in order for the full structural work to be carried out.

An archeological survey has recently been carried out involving local youngsters through a scheme initiated by the Moray Art Centre called Rekindle Kinloss.  Several exciting finds have been made and further work will be undertaken shortly. 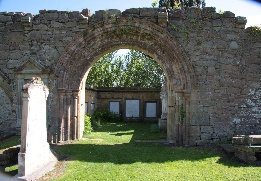 Kinloss Abbey Trust is attempting to keep the cloisters free of ivy while undertaking the more urgent work on the Abbot’s House.

It is hoped that the conservation of this beautiful area will be the next project.